The Global Rise of Knife Crime – Why?

May 12, 2021
In News 0 comment
I was 18 years old when I carried my first knife, I was 19 years old when I first used a knife and I was 20 years old when I looked at the first dead human body, whose life was ended by another type of edged weapon… a broken bottle. Then, I guess, I ultimately arrived at that ‘T-junction’ in life where you either turn left and continue on your path, or you turn right and make significant changes in your life. The following two decades I spent learning and studying the use of knives and more importantly the defence from such weapon, and as part of this journey I ended up training hundreds of frontline professionals in understanding the precise risks and detailed physical aspects and consequences of an ‘edged weapon attack’. In 2009 I decided to set up PPSS Group, a dedicated company, engineering and supplying specialised stab resistant vests (www.ppss-group.com) and our highly acclaimed SlashPRO® Slash Resistant Clothing brand (www.slash-pro.com) with the aim to protect frontline professionals further from this specific threat.

Now before I go into some aspects of knife crimes and share my humble opinions on some points, let me state one single thing that is of utmost importance when facing anyone with a knife, even if he/she looks like he/she hasn’t got a clue what he/she is doing. Let me use the words of Steve Collins, a man who established PS5 in 1986, now an internationally recognised consultancy, providing training to the law enforcement, defence and the security sectors in countries around the world. Collins once said: “There are a handful of supremely skilled people out there that could disarm you, take your knife and stab you four times with it before you realised you weren’t holding the knife anymore, So, if you are faced with the horror of a real knife attack and, for whatever reason, have forgotten to put on your full medieval battle armour… then don’t be a mug… RUN AWAY!” One got to understand that a hardly noticeable 1” (2.5cm) cut at the wrong place can well lead to rapid blood loss and subsequently be the final curtain in someone’s life, and those ‘wrong places’ are unfortunately, but most likely exposed in a close quarter combat situation… so yes… RUN AWAY if you can! Moving on from that, we do however also need to understand that running away is not always possible. This fact will most likely be dictated by two factors, one being your profession and the other being your environment. The following will highlight the extreme global problem edged weapon represent. I remember the many conversations I had with others many years ago. People used to be of the opinion that only guns kill, and knives don’t play a role in multiple/mass killings. History has proven these people wrong I guess. Let me highlight just a few headlines and dates of some rather horrendous violent incidents involving edged weapons from around the world, helping us to understand that it is a global issue, not limited to a certain belief, language, culture or country (although we have to accept that certain Central American countries have been leading the table of ‘homicide per capita’ for several years now). But let’s start with one country we don’t hear too much about in our local media in terms of knife crime/violence, China!

But let’s not pick on the Chinese and establish that other countries share this new global risk/threat: During the process of me writing this article, this list has been shortened again, again and again. The original version I had created was substantially longer.

Why the increase in such violent crime?

In his 2010 book “Knife Crime: The Law of the Blade”, John McShane compiles a catalogue of the UK’s most high-profile knife murders over the last few years. Describing the 1995 murder of Philip Lawrence, McShane declares that it marked “the dawn of an age when the response to a confrontation was no longer verbal or even rough physicality. Instead it was the quick, uncaring thrust of a blade from a feral youth lacking compassion or morality, thinking only of himself and nothing of the havoc caused to those in his way or their loved ones.” Well, there is no question about it, we do live in a society where individuals care far less for each other than they used to, and one can also identify a lack of compassion in parts of today’s world. Every time somebody commits a murder or assault, by making bodily contact, by choking, beating or in these cases by stabbing others to death, it always speaks of a level of rage and sometimes even a personal connection to the victim, but it most certainly also reflects an incredible lack of compassion. When you are stabbing someone, it's close and in your face. The experience is extremely graphic; it somehow tells an emotional story of hate or rage, and I do believe that more and more people are becoming more and more angry and frustrated with life in general (and somehow that brings them that bit closer to the stage of ‘rage’ from the offset)… rightly or wrongly. I look at humans and see them as ‘pressure cookers’. Many people in today’s society are under pressure, financially, emotionally, mentally or physically. A person can however only take x amount of pressure (some can of course take more than others) but ultimately many/most humans can ‘blow up’ if they haven’t learned to ‘let steam off’ in a controlled manner and in an environment where no harm can be done, or by finding a more balanced and satisfying life style in the first place. Many of those individuals have ‘exploded’ and taken action ignited by additional anger, hate, disappointment or frustration. They were unable to control themselves or simply chose not to. This is not an argument about right or wrong. It is just about finding answers to ‘why does it happen?’ Personally, I believe that five things in particular are a massive contributing factor to the increase of violent crimes involving edged weapons. 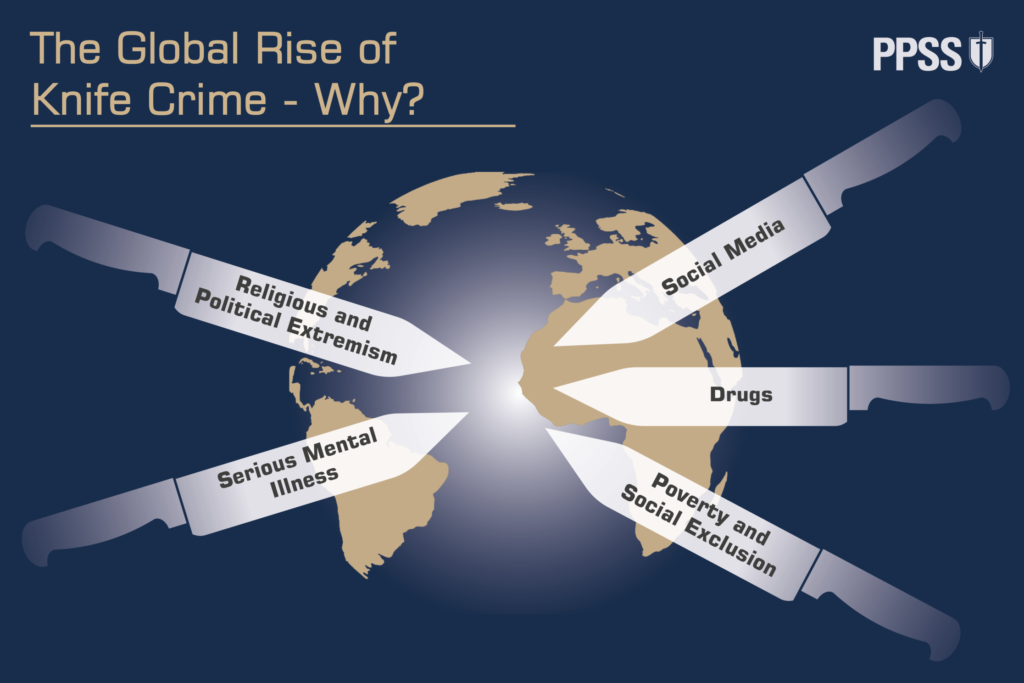 But why the clear shift from guns to knives?

In most countries guns are illegal. Selling or buying firearms, exporting or importing firearms, carrying or transporting them comes with a real risk these days. Due to the threat of global terrorism, Intelligence Services and Law Enforcement Agencies around the world keeping a very close eyes on everything metal that fires rounds aiming to kill people. The risk of being arrested during the purchase/sales/transport of firearms is just too high for most terrorists, criminals or ‘pressure cookers’. However, one of these individuals just needs to go home grab a kitchen knife and return to the place of anger and hate, in order to deal with others in the only way he/she believes is right at that moment in time. This ‘grab a kitchen knife’ point is also of great relevance in terms of the recent rise of global terrorism utilising edged weapon. Due to the stringent firearm controls in Europe and other regions, and the low planning required to conduct a knife attack whether against an individual or mass group), knives have recently become the weapon of choice for many so called “lone-wolf” attackers. Knives are commonly available, and this is not going to change, no matter what the law says or will say in the future. We cannot stop people from walking into the kitchen or the local hardware store, grabbing a knife (or screwdriver) and randomly stab other human beings. If one has the intentions to cause harm to others using a knife or edged weapon, then Intelligence Services and Law Enforcement Agencies will always struggle to prevent such atrocity. Knives are also much more concealable. The desire of people to want to conceal their weapon is based on the fact that it is a crime in many countries to carry an offensive weapon and they wish to avoid detection an arrest. A knife is easier to conceal than a firearm, hence more criminals move from carrying firearms to carrying knives. The desire for certain military or government personnel to carry a concealed weapon e.g. knife is of course of a different nature. A further reason why more and more people chose the knife over a gun when killing another human is a rather simple one. They couldn’t get a gun! It is very difficult to get a gun in most countries, and even if you live in a country where guns are available… the chance of purchasing a firearm if you have a criminal record is close to zero or certainly not ‘risk free’. My final reason why I believe knives are being used more and more is the ‘no training required’ aspect. To purchase a firearm is one thing… to fire a gun and hitting the target from a reasonable distance to avoid identification and arrest is a completely matter altogether. A knife is easy to use. It almost doesn’t matter where you stab that body… it will hurt a lot and likely kill that person (subject to the point of entry or number of stabs). Having looked and studied countless of edged weapon attacks and very much understanding this subject matter, I know that some attackers completely ‘got lost’ during the attack, and in total rage ended up stabbing the victim 100+ times in an extremely short period of time. Two of the last so called ‘feral’ knife attacks in the UK took place in September 2016 when Jamiv Usman attacked his 19-year young girlfriend and stabbed her more than 100 times. On Christmas Day 2017, a 72-year old pensioner was murdered when he was stabbed nearly 100 times in his back. The speed of a stabbing attack can be truly shocking. Most readers would not believe the potential ‘speed of motion’ in such vicious attack, and it is that ‘speed of motion’ that makes the subject of ‘knife defence’ so complex. I genuinely believe that over 98% of those so-called experts who teach or train others in what is in their opinion ‘effective knife defence’ shouldn’t be doing that. And the remaining 2% I would like to refer to as the ‘good guys’ will probably agree with me on this % split. I am a true believer in appropriate, operationally sound and reliable stab resistant vests and slash resistant clothing. Please visit our website (by clicking on the highlighted text links) If you share this belief... or email us info@ppss-group.com  Robert Kaiser, CEO PPSS Group
News
Share on Facebook Share on Twitter Share on Email Share on Pinterest Share on Tumblr Share on Telegram
Back to NewsMeeting With A True Body Armour Consultant Can Be Life Saving

Blunt Force Trauma: Are You Protected?